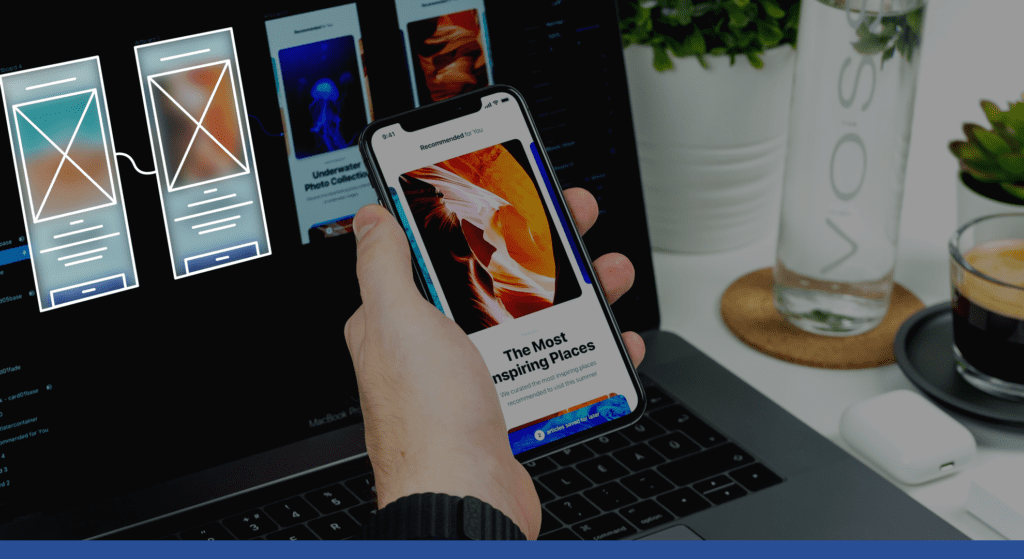 If you have been in User Interface & User Experience design long enough, you most definitely have come across the terms ‘Wireframes’ and ‘Mockups’. On the surface, the aforementioned terms are not the same and are used at different stages of the design flow, but there is a certain level into which you look at these two and some confusion may arise. No worries, minutes from now you’ll have a relatively better understanding of the two and when to consult them.

A Wireframe is a visual representation/illustration of the layout and architecture of interfaces (web or mobile). In its simplest form, one can call it the skeleton of a user interface; one that defines the structuring and positioning of various UI elements (Buttons, Text, etc). Primarily, wireframes are used to Visualize concepts and ideas but with a little more detail than sketches.

There are two major types of wireframes (emphasis on ‘major’, some argue there’s a third but let’s not worry about that for now); Low-fidelity (otherwise known as Low-fi/Lo-fi) and High-fidelity (aka Hi-fi). If you are not already aware, Fidelity in this context is in relation to the amount of detail with which UI elements are represented/illustrated.

When should we use Wireframes?

Stakeholders on the other hand are likely to be less experienced, as such, it’s best to present a more detailed High-Fidelity wireframe to them; that way they are more likely to understand and appreciate the idea or proposed solution.

A Mockup, otherwise known as a Prototype, is a representation/simulation of what the final product is likely to look like (it could be a simulation of an entire application or a single feature). Mockups are usually an upgrade to wireframes; an upgrade in terms of the introduction of Branding (Specific colours defined in the Style Guide), Real copy, Interactive elements, and in some cases, Animations. Unlike Wireframes, mockups are primarily for testing.

A popular technique of implementing lo-fi mockups is Paper Prototyping. Paper prototypes/mockups are similar in appearance to Paper wireframes but have a different purpose (testing rather than evaluation). This is why Paper prototypes/mockups are expected to support some level of Interactivity that facilitates the completion of tasks when presented to users for testing.

When should we use Mockups?

Wireframing and Prototyping are integral parts of any User-centered Design process. Surfacing at different stages; whether it be for idea visualization, presentation, or user testing, it is important to know the right tool for your context of use. Lo-Fis are best suited for time-sensitive scenarios (idea visualization and presentation) and Hi-Fis are best suited for detail-sensitive scenarios (user testing and design hand-offs).