Deprecated: Function Elementor\Widgets_Manager::register_widget_type is deprecated since version 3.5.0! Use register instead. in /var/www/html/wp-includes/functions.php on line 5381
 How much does it cost to make an app - Sprinthub: Top Software Development Company in Nigeria 
Deprecated: Function Elementor\DB::is_built_with_elementor is deprecated since version 3.2.0! Use Plugin::$instance->documents->get( $post_id )->is_built_with_elementor() instead. in /var/www/html/wp-includes/functions.php on line 5381

How much does it cost to make an app 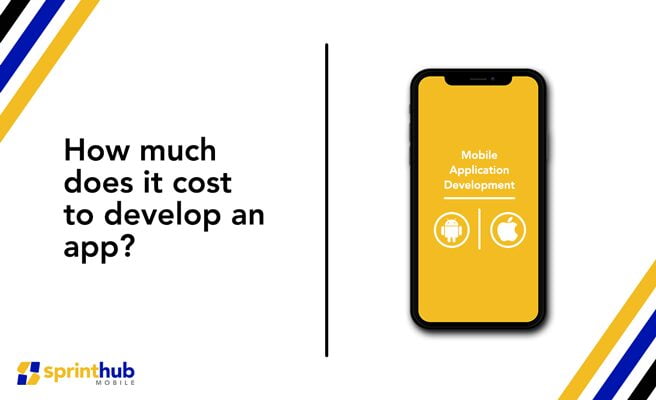 After your idea generation and validation, the next and most-asked question is: how much will it cost me to build my app?

Yes, no matter how fantastic your idea is, budgets must be made to ensure your amazing app development idea comes to life without leaving you bankrupt.

To help you, we created this article detailing how much it cost to make a mobile app like Bhood Music, Cabby, etc.

Thus, in this article, you’ll get a full analysis of top applications from the app store with details showing how much it would cost to develop an MVP look-alike of such apps, including how to calculate the cost of building your app and the variables that might affect the value of your app.

If you read till the end, you’ll leave this guide with a rough estimate of how much it will take you to build your app.

How much do app developers charge?

Mobile app developers can charge from $3,000 to $5 million to build an app. No, that wasn’t a typo; some app development projects cost a fortune.

You need to consider many factors before estimating the cost of building any app.

For example, the cost of building a bare app with limited functionality and no 3rd-party integration will differ from building a full-fledged custom app with features of Facebook and Amazon combined.

Keep reading; we have all that covered below.

For now, just know that the hourly rate of developers working on your app and the time required to develop its features are the most significant factors used in determining the cost of developing an app.

Thus, you can calculate the cost by multiplying the hourly rate and time duration.

The time duration is the number of hours it’ll take the developers to finish your app, and it depends on the features and the complexity of the app.

These charges vary on the level of the developers you will need for your app development.

The US dollar is a common currency mobile app developers use in charging clients due to its stability level.

Hence, price variations can be due to the cost of living in different countries.

For instance, the price of rent in India is 85.32% lower than it is in the United States and the overall cost of living is 65.06% lower, which in turn affects the average monthly net salary in India and U.S.

The same is the case if you compare with a country like Nigeria.

With that in mind, let’s delve into the cost of development some prominent apps to get you started.

How much does it cost to develop an app like Whatsapp

The cost of building a real-time messaging app like Whatsapp is mostly dependent on the feature required in the app.

Some features common in WhatsApp are chats and voice message, voice and video call, sharing images, documents, location, and other media content.

If you are going for a Whatsapp clone, then you might want to look at the Whatsapp MVP features below.

Below is a summary of a WhatsApp’s MVP features and development time.

Mind you; the above cost estimate is excluding design and non-development hours like project management.

Why build a music streaming app?

The features needed for a music streaming app depends on your target audience and the goal you want to achieve in the app.

Let’s take a look at the MVP features needed for a music streaming app, using Spotify’s MVP features as an example.

However, some significant cost factors in building a music streaming app are the hosting and licensing cost. Also, the algorithms used to generate music suggestion, social sharing, etc.

It is essential to consider these factors and seek a mobile specialist to give you insights into the best option in terms of what hosting and licensing platform to use for your app.

If you want to build an app like Instagram, keep in mind that it’s a rather complicated application to develop due to features like image-filtering, sentiment analysis and language translation.

Some other MVP features include

Custom UI/UX design of the app will most likely take up to 102- 160 hours depending on the features and the screen requirement of the app, backend development estimated hours 198-352.

How much does it cost to make an on-demand app like Uber?

On-demand transport app has been revolutionizing the transport and logistics industry.

Basic features of the passenger platform:

Factors that affect the cost of making an app

There is no best option in deciding if to use a freelancer or an in-house developer or a full-stack development team to build your app.

That would depend on the goal you are trying to achieve with your app.

However, to guide you, let’s delve a little into each option.

Developing an app with a freelancer

Well, going this route depends on the type of app and your app budget.

While using a freelancer might be the best option in terms of cost, it’s not advisable for big apps projects requiring more than one developer.

Most apps do require more than one developer. Asides that, building an app people would use (and generate income), with a single person development path (freelancer) is a no-no.

Developing an app with In-house developers

In-house developers are those working within your organization.

Many businesses prefer this over hiring a freelancer because they can monitor the activities of the developer developing your app, as well as involve actively in the development process.

Again, for a large project, using an in-house developer is not the most effective option.

There’s likely to be biased, as they may not be in touch with current development best-practices worth considering while building your app.

Hiring an App development agency to build your app

Even big companies like General Electronics and others used app development agencies to develop their apps.

Many startups prefer this option because of the complete package it comes with.

For example, at SprintHub Mobile, our full-stack team also have marketers that help to ensure the final product can generate sales.

Do you want to create an app people won’t discover in the app stores and use it for you to achieve your goals?

Also, even if you settle for a freelancer or in-house developers, remember you’ll still have to pay separately for designers to design the interface of the app, a project manager and quality assurance specialist.

It’s for the above reasons most businesses go for a full-stack mobile app development company.

You should do the same to save you stress and time for growing your business.

Although the difference in cost is highly debatable, building your app on ios and android might not be a noticeable difference. However, the price for deployment of your app varies as in android you pay a one-off fee, but a yearly fee for apple app store

3. The complexity of the app

These are mobile apps that communicate with a server on the internet to process data or retrieve data to the user. The server, also called Backend, is needed for hosting the business logic the platform, send push notifications, schedule emails and connect to the database. Apps built with a web server requires backend developers which incur an additional cost. Examples of apps with web server are facebook, twitter, or any music streaming app, etc.

These apps are stand-alone. They are self-contained and function well without requiring a web server. These apps do not need a backend developer and not complex to make.

Nothing good is achieved in isolation. The team you will need, and the size is mostly dependent on the type of app you are planning to develop. A complete app development team include;

While your user might not see the awesome code, but they will surely see the design and layout of your app. The UI/UX design gives the developers a framework to build both a functional and aesthetic app.

Finally, devs. When the designers are done with the app’s design, the developers step in. Their responsibility is building the app structure and its functionality. Android developers use Java, Kotlin, and C++ languages to create native apps, and IOS work with Objective-C and Swift. There isn’t much difference between iOS and Android devs workflow; the difference is more in the tools used for developing the app.

Quality Assurance specialist keeps tabs on every stage of the app development process and ensures that the product design and technical elements adhere to the standard specified in the project documentation. They test after the development of the app is done to check the app’s performance under various conditions, while checking for bugs. They make sure your app works perfectly well before launch.

Understanding how to calculate the cost of development for your app will give you an idea on how you should budget for development and maintenance. But if you are still confused about how much to budget for the development of an app, you can request a free quote from our mobile specialist.